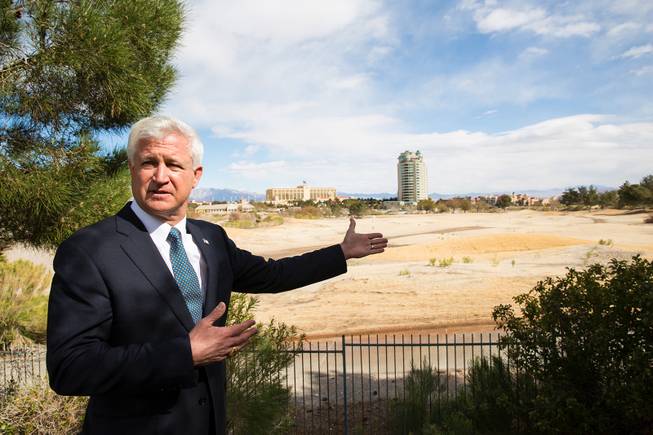 (Chuck Muth) – There’s a bit of good news on the Badlands front.

By a vote of 4-3 last week, the Las Vegas City Council voted to repeal a 2018 ordinance pushed through by disgraced ex-Councilman Steve Seroka that essentially targeted the developer of the land where the now-shuttered Badlands Golf Course is located in the Queensridge community in northwest Las Vegas.

That land is, and always has been, zoned for residential housing.

But the “Seroka Screw-Job” ordinance retroactively reclassified it as an “open space” and forced the property owner, EHB Companies, to jump through a bunch of new and costly bureaucratic hoops in order to use the land as originally designated.

That, arguably, was a government “taking” of the land without proper compensation.  A constitutional no-no.

And if the court system, as expected by many, agrees, ALL of Las Vegas’ taxpayers could be on the hook for the damages and financial losses the builder has suffered due to delays in approving the project.

While repealing the “Seroka Screw-Job” ordinance doesn’t make the developer whole for the losses already incurred, the hope is it will at least stop some of the bleeding.  A positive first step.

Unfortunately, the lawyer representing some of the Queensridge home-owners, Todd Bice, spoke at the council hearing and warned of additional litigation if the “Seroka Screw-Job” was repealed.

Fortunately, a majority of council members chose not to cave in to his threat.

1.)  After Seroka’s abrupt resignation under a cloud of scandal last year, a special election was held to fill his Ward 2 seat in June.

Victoria Seaman won that election, in part, on her promise to find a solution to the Queensridge Quagmire.  And to her credit – despite inflamed, often bullying, opposition from some of the home-owners – Seaman proposed the ordinance repeal.

Resolution is going to require not only political courage, but a “big picture” perspective that takes into account not only the concerns of Queensridge home-owners, but also non-Queensridge residents in Ward 2, as well as non-Ward 2 taxpayers throughout the entire city.

2.)  Another extremely positive – and totally unexpected – development during the meeting was a surprise audio recording that Councilwoman Michele Fiore played during the hearing from former Nevada Congresswoman Shelley Berkley.

“Michele, it’s Shelley Berkley. … As a Queensridge resident, it is time to resolve this issue.  If the developer owns the property, and if he has a legal right to develop, then we need to move forward on this because the status quo simply is not working.

“If he conforms to the zoning and comes up with a good density plan, then I would suggest that we look at moving ahead because it cannot continue in this manner. … I think it’s time we move on, recognize his rights, and start developing and turning that area into a paradise.”

A voice of sanity and reason!  How refreshing.

But what I found particularly interesting about Ms. Berkley’s message is that one of her longtime – dating back to at least 1998 – major donors to her various campaigns is the lead instigator/agitator/bully/ogre in the Queensridge Quagmire mess, lawyer Frank “Shrek” Schreck.

Maybe it’s time for a “Come to Berkley” meeting with Shrek?

3.)  Councilmen Stavros Anthony and Cedric Crear voted against repealing the “Seroka Screw-Job” ordinance.  But considering they voted in favor of it back in 2018, that’s not exactly a surprise.

However, what in the world was freshman Councilwoman Olivia Diaz thinking in voting against repeal?

The Queensridge community is on the exact opposite end of town from her Ward.  And the income disparity between the wealthy home-owners of Queensridge and her low-to-middle income constituents is even bigger.

But here’s the thing…

While her constituents, by and large, will never be able to afford to BUY a home in Queensridge, many of them would be HIRED to build the residential homes in the new development if the city OK’s the project.

Why would she vote AGAINST jobs for her working-class constituents?

If I was a member of the Laborers Union – which supported her in the election last June and testified in favor of repeal – I’d be furious at such a betrayal.

Fortunately, the Seroka Screw-Job was torpedoed without her vote.  And maybe, just maybe, a tiny glimmer of light for resolution of this long-running mess can now be seen at the end of the tunnel.

Hope springs eternal, even in the Badlands!

BTW:  If you want to get breaking news and email updates on this issue, you can sign up by going to: LandSnatch.com