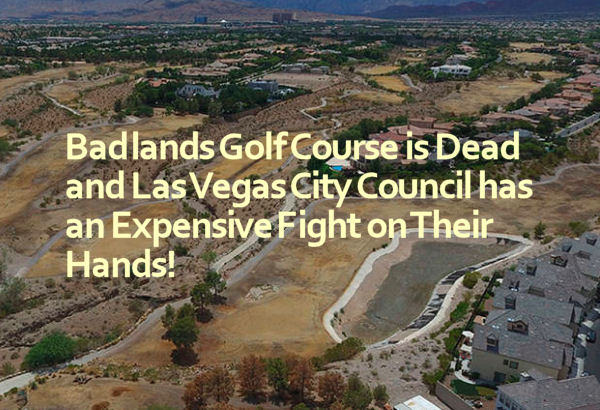 (Chuck Muth) – I swear I’m not clairvoyant.  And I swear I have no inside court information.  What happened yesterday was pure coincidence.

For those of you who read Part I of this series Monday afternoon, you’ll recall that I ended with this…

“Indeed, by most accounts I’ve heard, the city AND the city’s taxpayers are highly unlikely to win and should probably just fold.  Why?  Because of a little thing called ‘Knick v. Township of Scott.’”

And lo and behold, the very next morning an important decision related to this brouhaha was issued by U.S. District Judge Kent Dawson.  Again, pure coincidence.  But let’s dive into it…

Long story short:  The land where the now-defunct Badlands golf course sits has always been, and continues to be, zoned for residential housing.

The golf course was sold a few years ago, and the new owners sought approval from the City of Las Vegas to actually build residential homes on portions of the land zoned for…um, residential homes.

However, as Judge Dawson noted in his ruling…

“The plan met considerable backlash from the community (referring to disgruntled homeowners in the adjacent Queensridge gated community), leading the City Council to deny the applications.”

This led to a series of four lawsuits filed by the developers against the city for what is referred to as “inverse condemnation.”  And as I explained in an earlier column…

And to understand why I wrote on Monday that “the city AND the city’s taxpayers are highly unlikely to win” on the case, I’ll let Judge Dawson take it again…

“The gist of the (home builders’) complaint was that the City Council’s denial decreased the value of the developers’ property, resulting in a taking without just compensation.  The parties litigated the case exclusively in state court [Eighth Judicial District Court], and the City repeatedly moved to dismiss the developers’ complaint.

“The City first moved to dismiss the developers’ inverse condemnation claims in October of 2017, which the state court denied.  The City moved for reconsideration, which that court also denied.  More than a year later, the City moved for judgment on the pleadings but was denied again.

I know there’s some confusing legalese in here for Joe Lunchbox, but the bottom line is this: The City of Las Vegas has spent over $2 million so far in legal fees trying to kill the developers’ lawsuits in state courts and has lost…every…single…time.

This was a critically important decision by the United States Supreme Court issued last summer relating to “inverse condemnation.”

And because the City so far has lost in state courts…every…single…time, it decided to try to take the case out of the hands of the state courts, roll the dice, and see if they could move it into the FEDERAL court system, using the Knick decision as its excuse.

The request to move the case ended up in Judge Dawson’s lap.  But the city, yesterday, crapped out.  Again.

The developers argued that the Knick decision was no basis for moving the case to the federal court and asked Judge Dawson to “remand” (send it back) to the state court system.

There are a lot of legal technicalities and arguments over the meaning of the term “other paper” in Judge Dawson’s 9-page decision, but the bottom line was this…

“The Court remands this case to the Eighth Judicial District Court of Nevada.”

The City of Las Vegas lost AGAIN.  And the writing’s on the wall.

One of the four lawsuits the City tried to move to the federal court system has already been sent back to the state courts.  Then there’s yesterday’s decision on the second one.  So it seems highly likely the other two are gonna get kicked back, as well.

Now, here’s the thing:  We haven’t even gotten to the merits of the case yet!

All this legal maneuvering and posturing by the City so far has been to stop the home builders’ lawsuit from even being heard.  But it’s now abundantly clear the train has left the station and there’s no putting the toothpaste back in the tube.

So…once the case finally IS heard in state court, what are the odds of the City of Las Vegas winning against the developers’ inverse condemnation claim?

Not good.  Which we’ll dive into in Part III of The “Taking” of Badlands 123.  Don’t touch that dial!

P.S.  If you want to sign up to get breaking news and email updates on this issue, you can sign up by going to: LandSnatch.com